By FractalTribe Network (other events)

With as much attention as this particular date has received over the past few decades through books, movies, documentaries and endless Youtube propaganda, we felt it was important to divert your attention away from the 'end of the world' and towards a more positive idea. This is the beginning of an age where we are finally able to let go of an irrational fear of things simply falling apart. Through a strong sense of community and an understanding of the importance of group efforts, we can accomplish anything. This is the meaning of TRIBE.

This event is about family. And in order to find a deeper sense of what 'family' is, we are bringing you back to the ritualistic roots. Incorporating ceremonial practices that we have created ourselves, we will lead you through the night as a shaman would lead you through a tea ceremony. Our shaman's catalyst: TECHNOLOGY.

Often we will see creativity changing the appearance of our culture, without recognizing the forces behind it. Technology is not separate from the creative process. Everything we utilize in modern society was once someone's idea: just a thought, a possibility. Knowing how to harness the power of possibility is the key to giving birth to miracles in our daily lives. When we get hung up in the everyday life of modern society, we get away from our inherent tribal nature. It's time to return to what we are, creative beings curating every possibility imaginable.

1. Respect the sacred space. Any signs of public intoxication are grounds for immediate removal without refund.
2. Presales only. There will be no cash box at the door and you MUST be on the list to be granted entry.
3. Have fun. Thats what you came for.
4. Follow the directions sent to your email (presale buyers only).

KOKOPELLI (not from around here) 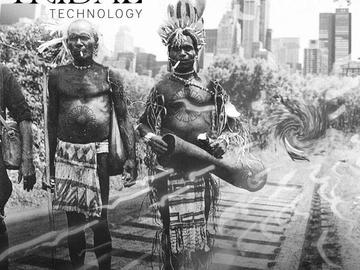 No Drugs
No Outside Alcohol
No rave gear ,No glow or led lights.

other events by this organization